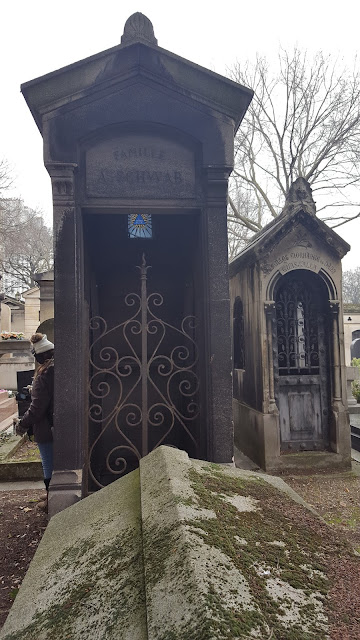 In December, 2016, on a cold day, when it seemed like it might snow, we visited the historic Montmartre Cemetery in Paris, France, and searched for the grave of my great-great grandmother, Hermine Sax Schwab. I heard it existed here in this location from my grandmother, Alyse Laemmle, but I had never seen it and she wasn't quite sure where it was. She said: "IT'S IN THE FAMILY CRYPT."
But which family? Laemmle? Schwab? Sax?

Hermine Sax was born in Paris and then married Mr. Schwab and they had a daughter and a son. After her husband passed away, she moved to live with her daughter, Alice Schwab Laemmle and her husband, Siegfried Laemmle, in Stuttgart, Southern Germany - not too far by train from Paris. 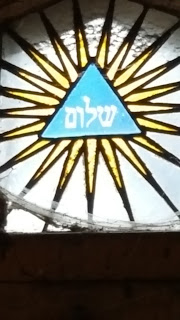 Amazing, sad and lucky that she managed to be buried back in the city where she was born and was not deported by the Nazis. What happened? In 1938, her son-in-law Siegfried Laemmle, did not want to leave Germany. Despite the Nazi reign of terror, he still believed that as a World War I veteran, he would be spared, even if he was a Jew. Siegfried owned an industrial oil and grease factory in Stuttgart. But was forced to sell it to the Nazis for nothing, and so after Kraystallnacht, he finally decided to leave Germany with his wife, Alice, and mother-in-law, Hermine. They shipped all their belonging to Los Angeles and left for Paris; booking passage on a ship from Le Havre, France, but Hermine took ill and passed away before the ship left -in Paris. In her 80's, she perhaps was traumatized by all the upheaval of the Nazi era and being forced to be uprooted and travel at her age must have been very difficult. 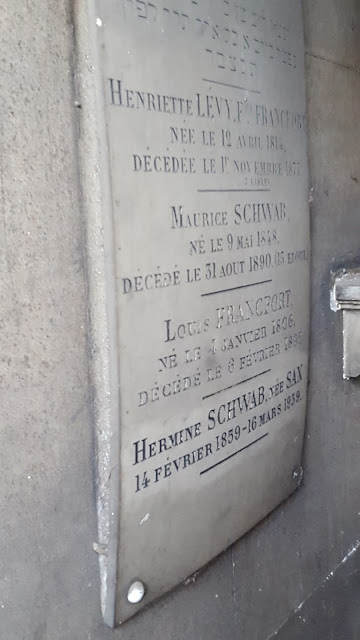 We located the grave is this lovely ancient cemetery with Jewish graves dating back hundred of years, with a little help from the groundskeeper. The Schwab family crypt turned out to be a lot bigger than I expected - with beautiful stained glass.
It was in a very old mausoleum with a stained-glass triangle with sun rays radiating out of a blue pyramid. Inside Hebrew letters spell SHALOM - Peace. The first Schwab was buried there in 1877.

The family had a paper mache factory and was very artistic, according to my grandmother. We certainly felt the weight of Jewish history in this cemetery and realized how lucky Hermine was to be honored in this way with her family.

Soon Jews would be driven from Paris and into hiding, as the Nazis occupied Paris....but luckily these graves were not disturbed.
May they all rest in peace. 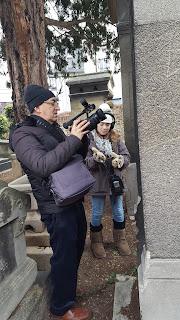