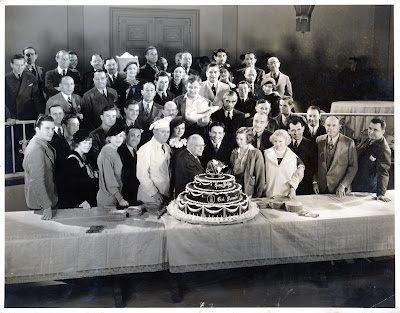 HAPPY BIRTHDAY, UNCLE CARL LAEMMLE!!!
My grandfather's cousin, YOU, Carl Laemmle, passed away in 1939.
Your 150th birthday was yesterday, January 17, 2017.
So, happy birthday, Uncle Carl!!!
Thank you for founding Universal Studios, the longest continually-operating motion picture studio in the U.S. -- that has given us so many great films, including ALL QUIET ON THE WESTERN FRONT
and THE HUNCHBACK OF NOTRE DAME. Not to mention FRANKENSTEIN. And so many others...
Indeed, Universal has grown into a mighty oak from the seeds you planted.
With your generous spirit, you gave my grandfather his first job in the U.S.
And you for saved Jews from Nazi Germany.
Of course, you probably gave my grandfather a job because you thought he'd be a great salesman, but my family is happy you gave him his start.
From there he went on to found the Laemmle Theater chain with his brother, Max.
I wish I could have met you...