I Was Born in Germany.

February 08, 2016
How did I -- a second-generation German-Jewish American -- end up being born in Germany in 1964?
But, before I answer that question (one I always get asked) isn't Freiburg beautiful? On the edge of the Black Forest, it harbors a Medieval town center and a University.

Now, for the answer:
My father, after graduating from Bolt Law School decided to refine his knowledge of German Law at the University of Freiburg.

My mother was very brave to accompany him. I was born on September 12th, soon after they arrived and stayed seven months. In the Spring, Mom returned to LA a bit early to spend some time with her parents. My father joined her a few months later.


A menorah is a symbol of light. Of course, Jews light it on Hanukkah. But the story of this object goes back much farther to the original Temple in Jerusalem. I see the contradiction between being born Jewish in post-Holocaust Germany as a chance to shed light to the world.

As I research my family's past in Germany, I meet new relatives and historians. Germans care today. They are trying to help make amends and this heals both sides. Gabi Bayer's husband, Udo, was the top researcher of Carl Laemmle in Germany and perhaps world wide. Gabi is working to publish Udo's writings -- a biography of Carl Laemmle. Udo has published several articles, most of which are in German, but they are being translated into English slowly. 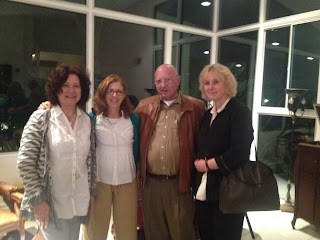 How can Germans and Jews heal their past? Any ideas to share?
Germany Historical Memory History Jewish Tolerance. Holocaust