I Know Why The Caged Bird Sings 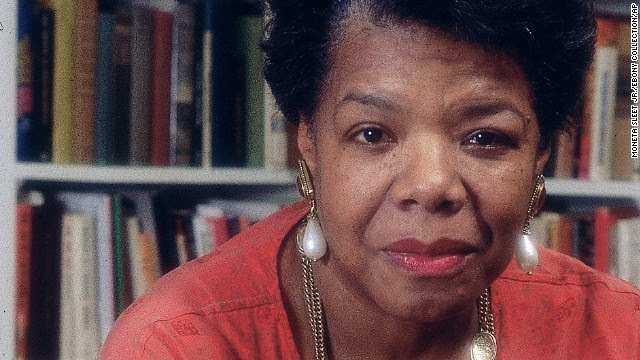 Good-bye, Maya Angelou.
The title above is one of the best titles ever penned.

From an article in AP today, after she passed away at 86 in South Carolina of an unspecified illness.

"I'm not modest," she told The Associated Press in 2013. "I have no modesty. Modesty is a learned behavior. But I do pray for humility, because humility comes from the inside out."
[Inspiring words, no?]

"Her story awed millions. The young single mother who worked at strip clubs to earn a living later danced and sang on stages around the world. A black woman born poor wrote and recited the most popular presidential inaugural poem in history. A childhood victim of rape, shamed into silence, eventually told her story through one of the most widely read memoirs of the past few decades."

[I read Maya's autobiography, I KNOW WHY THE CAGED BIRD SINGS, when I was traveling in my 20s and it had a profound affect on me, as a young woman. I felt connected to all women through out the world in a struggle for dignity . . . Maya in Egypt, married, struggling against an oppressive husband . . . and me traveling alone in the Israel and Kenya, learning to fend for myself.]
[I read of her struggle in relationships -- to balance passion and art -- to express herself and to take care of her son -- to be free and to be responsible. I read 4 of the 7 autobiographies, as many as I could find.]

The title phrase: "I Know Why The Caged Bird Sings" haunts me, because there are still women today in mostly-metaphoric cages, struggling to sing. A woman in Pakistan was stoned to death by her family for marrying the man she loved.

[I was thrilled to read of Maya living in Laurel Canyon with her son and making his favorite meal to cheer him up, when they weren't getting along too well. She described it in detail and I could tell she was a great cook.]

[I loved her commitment to writing herself -- to telling us about her own personal journey, as it related to the world and the times she was living in. She saw herself as part of a bigger picture --something that is a sure sign of genius.]

"She lived a life as a teacher, activist, artist and human being. She was a warrior for equality, tolerance and peace," her son Guy Johnson said to AP.

"She called herself a poet, in love with the "sound of language," ''the music in language," as she explained to The Associated Press in 2013. But she lived so many lives. She was a wonder to Toni Morrison, who marveled at Angelou's freedom from inhibition, her willingness to celebrate her own achievements. She was a mentor to Oprah Winfrey, whom she befriended when Winfrey was still a local television reporter, and often appeared on her friend's talk show program."

"She mastered several languages and published not just poetry, but advice books, cookbooks and children's stories. She wrote music, plays and screenplays, received an Emmy nomination for her acting in "Roots," and never lost her passion for dance, the art she considered closest to poetry."

[And through it all she was a caring, courageous mother to her son, and strong, independent, passionate woman. She will be sorely missed.]
Children's Stories. Dance Maya Angelou Poetry Writing